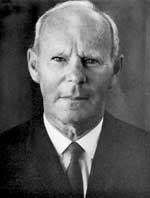 The School community was saddened to hear of the death at the age of 95 of G.L. (Dad) Weir, a 1922 foundation student, on 31 October 2003. In 1926 he was Head Prefect, Captain of the 1st XV Rugby and the 1st XI Cricket teams. He returned to teach in 1938 and stayed for 41 years as a teacher of English and French, taking leave to serve with the New Zealand armed forces in Egypt and Italy during World War II. In later years he was HOD English, Deputy Headmaster and Acting Headmaster. Over the years he was also the coach of hundreds of rugby and cricket players.

He, himself, played representative rugby for Auckland and eleven cricket tests for New Zealand. At 95, he was the world’s oldest living test cricketer.

It is with regret that we also inform you that his wife, Mrs Betty Weir, passed away on 5 December, aged 94 years.