MAGS’ Kapa Haka group has held its place among the top 10 Auckland schools at the ASB Polyfest for many years, and is managed by our Te Puna o Wairaka whānau unit. The group also perform at the school’s Unity Cultural Concert.

Students have to learn lyrics to a level of excellence in pronunciation plus melody and hand actions. Rākau, poi and patu are used and it all needs choreography. Students need to be Kapa Haka fit to produce energetic movements and project a huge sound. On top of that, they are required to project emotion and connect spiritually with each item.

All the composition is done by Ms Paul and Mr Walters, who are Kapa Haka champions in their own right.

Students of all year groups and nationalities are welcome to join our Kapa Haka group. Listen out for notices and contact Mr Peter Walters: [email protected] Te Puna o Wairaka put on their greatest ever performance at Polyfest on to finish third in Division 1 – their best result on the Māori stage.
Due to Covid-19 restrictions, this year’s competition – held on March 25 ­– had moved online, with each group performing on stage to the judges and a small handful of supporters and backstage workers, while the performance was live-streamed on the Māori Television website. For the non-aggregate (non-competition) items, Te Puna placed 3rd for ‘Kākahu wahine’ (Female costumes), 1st for ‘Kākahu tāne’ (Male costumes), 3rd for Co-Ed Mau rākau (use of the rākau weaponry), 2nd equal for Manukura wahine (female leader), 3rd equal for Manukura tāne (male leader).
For the aggregate (competitive) items, Te Puna placed 3rd for the ‘Poi’, 3rd for the ‘Whakawātea’ (exit item), 3rd equal for ‘Mita o te reo’ (the command/use of te reo Māori’ including clarity and diction – accurate/fluent pronunciation).
Whaea Waimirirangi Paul said, “This year’s campaign was particularly challenging with students and one of our head tutors, Matua Peter Walters, going in and out of isolation.
“As a result, only 38 students took to the stage, where normally we would produce a 50-strong team. Further, normally there are three divisions, with a total of 42 teams across all divisions. However, this year only 18 schools participated on the Māori stage.
“Despite these challenges, the students persevered and worked incredibly hard for seven weeks to produce an outstanding performance on stage. In the end, the performance was dedicated to te hunga whetūrangi (those who’ve passed on in recent times), including our Albertians who fell during World War II, in celebration of our Centenary this year. We are very humbled by these achievements and look forward to what the future has in store as this is only the beginning!” MAGS’ Kapa Haka was first up on the Maori Stage at Polyfest on April 17 and battled terrible weather conditions to finish in eighth place in Division 1.

Fifty students were involved in the Kapa Haka rōpū, and had been training for eight weeks, on Wednesdays and weekends. HOD Te Puna o Wairaka Ms Paul said that in Division 1 you have to perform a number of items over 30 minutes. There are six different disciplines, with haka just one of them.

“In summary, we placed eighth overall out of 14 kapa in Division 1 and had some close aggregate placings that would have seen us place third in some disciplines had it not been for one or two points.

“Looking ahead, we plan to have a debrief to go through the results and judges’ comments in more detail, and to discuss how we can better prepare ourselves next year with the aim to improve our overall competitive results and campaign in general.”

In possibly their best ever performance, MAGS’ Kapa Haka group placed sixth in Division 1.
After the cancellation of the last day of Polyfest due to the Christchurch shootings, the rescheduled competition was renamed Te Pou Herenga o Kia Aroha and held on April 6.
Due to the postponement, this year’s campaign consisted of nine weeks’ worth of training, including Tuesday and Wednesday practices from 3.45pm-9pm, all-day Waitangi Day and six live-ins from 6.30pm Friday through to 1pm on Sunday.
Seventy two students trialled for the group; 50 made the performing team and 15 were reserves.
HoF Te Puna o Wairaka Waimirirangi Paul said, “Overall, we placed sixth out of 13 groups in Division 1, and roughly 52 groups across all three divisions at the competition. We were only five points away from fifth place. This is the best overall aggregate placing MAGS has received, to my knowledge.
“Overall, the comments received from the judges were very positive and some even implied that they thought we would qualify for nationals. However, such is the fate of a competition this tight! The students, wider whānau and us, the tutors, were all extremely proud and happy with the outcome and look forward to next year’s campaign.”
Earlier in the year, MAGS’ Kapa Haka instructors Waimirirangi Paul and Peter Walters became national champions.
Whaea Miri and Matua Peter not only teach Kapa Haka but also take part themselves with their West Auckland-based team, Ngā Tūmanako.
At Te Matatini (the biennial national kapa haka championships) in Wellington in late February, Ngā Tūmanako were crowned Toa Whakaihuwaka (champions) after competing against 46 other teams from all over the country over four days. Their winning performance focused on the revitalisation of te reo.
More photos here Mount Albert Grammar School’s Kapa Haka group put in one their strongest performances on Saturday, March 19 at ASB Polyfest to finish seventh and retain their place in the prestigious first division.
Waimirirangi Paul, HoF Te Puna o Wairaka, said it was an impressive performance, given they were up against Maori immersion schools. Weeks of planning, practice and costume-making went into the 30-minute performance.
Ms Paul said she was grateful for the support from students, staff, friends and parents on the day and for their positive feedback after the performance on Saturday.
This is how the Kapa Haka group ranked in the various categories: Kakahu Tane – 3rd, Wahine Kakahu – 9th, Wahine Leader – 4th, Tane Leader – 11th,  Tira – 4th,  Mau Rakau – 5th, Eke – 9th, Moteatea – 4th, Waiata a Ringa – 10th,  Poi – 6th, Haka – 5th, Watea – 6th, Mita o te reo – 6th.
The Kapa Haka group were one of seven MAGS cultural groups competing over the Friday and Saturday. Mount Albert Grammar’s Kapa Haka group put on a stunning performance the ASB Polyfest on Saturday, 18 March, to come 9th in Auckland, retaining our place in the prestigious first division.

Forty seven students from Years 9-13 performed a 30 minute set of seven disciplines – an entrance item, a choral piece, a traditional chant, an action song, a poi item, a haka and an exit piece.

They were judged on their performance and command of te reo against 50 other groups competing across three divisions.

Head of Te Puna o Wairaka, Ms Waimirirangi Paul, said this was an impressive achievement when MAGS was up against schools with bi-lingual and full immersion units, and who had performers who competed nationally.

“Our group rehearsed several times a week since January, including weekends staying at marae. They not only wrote and choreographed original pieces, they also learned elements of weaponry to incorporate into their performance, made costumes and submitted a written translation and explanation of the meaning behind each item,” said Ms Paul.

A number of Albertians returned to assist in the group’s preparation, and Ms Paul was also grateful for the support of parents and staff. She acknowledged the leadership of Year 13 members Waimarie Hunia and Kahurangi Morehu. “The students represented the school strongly and with much pride,” said Ms Paul. 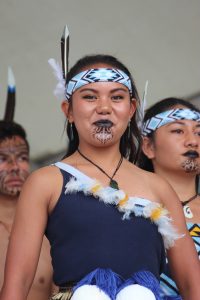 Headmaster Mr Patrick Drumm, who is Chairman of the Polyfest Trust, hosted Prime Minister Mr John Key during his visit to the festival on Friday, 18 March. Mr Key attended a VIP function, where members of MAGS’ Te Puna o Wairaka performed waiata, and then visited the Cook Islands stage and walked through the grounds speaking with students.