The results for the Auckland Central Sheilah Winn Shakespeare Festival have been announced and MAGS has been particularly successful, with Lara Chou (pictured above right) given direct entry into the National Shakespeare Schools Production holiday workshop for her portrayal of Lady MacBeth.
This is awarded to a student who shows particular talent and places her directly into contention for the Shakespeare Globe Centre NZ’s National Shakespeare Schools Production
David Laxon’s interpretation of Romeo and Juliet (pictured right) has been recognised by being accepted into the National Festival. 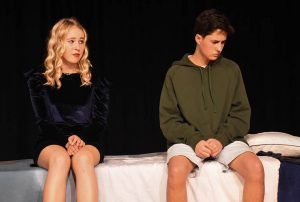 All students involved in this scene have the potential to join Lara depending on how well the National Festival goes. David was also recognised for Most Original Concept. He reinterpreted the classic tale of forbidden love with gender being the primary reason the young lovers are kept apart.
Finally, Year 9 student Ryan Antia (pictured above left) was acknowledged for his growing performance skills by being awarded Most Promising Actor for his portrayal of Le Beau from As You Like It.
HOD Drama Gerald Urquhart was delighted with the results and thankful for all the students involved. Mr Urquhart was pleased that our students have been recognised for their creativity and expertise.
This year, because of the COVID-19 lockdown, MAGS had to film its three submissions for the Sheilah Winn Shakespeare Festival rather than perform them live.
Mr Urquhart said, “Like everything this year, the lockdown forced changes with this annual event. Ordinarily we would attend a regional festival and perform live.
“This year we submitted filmed entries that preserved the theatricality of the performance. Despite the disruption and challenges, the students performed well and came together as a group. This was in large part due to the leadership from the directors and student leaders Ruby Taylor-Sinclair and Cade Stevens. We also had two assistant directors – Yasmin Lakeman and Rose Leader.”
There were three scenes submitted. Ophelia Sykes and Sarah Norman reinterpreted Lady Macbeth’s breakdown as a fracturing of her psyche into three distinct personalities. They used elements of physical theatre and contemporary dance in their portrayal of her descent into madness. You can see the performance here
David Laxon reimagined Romeo and Juliet in a modern context. It echoed the original tragedy of two people being prevented from loving one another, but this time by gender not name. You can see the performance here
Finally, Mr Urquhart directed a more traditional take on a scene from As You Like It. The comedy was increased somewhat with the forced inclusion of a socially distanced wrestling match. You can see the performance here
Macbeth, directed by Ophelia Sykes and Sarah Norman, featured Lara Chou, Molly Cavanagh, Sarah Norman, Cade Stevens, Imogen King.
Romeo and Juliet, directed by David Laxon, featured Al Tahir, Finn de Lange, Faolan Okan, Norah Anderson, Ruby Giblin.
As You Like It, directed by Mr Urquhart, featured Jorja Stevens, Stella Hardwick, Belle Horan, Ryan Antia, Reet Kamra, Ruby Cato, Lole Kulatea, Georgia Smith, Jude Wilson