The first five years of Mount Albert Grammar School for Girls have passed us by and as we say goodbye to the foundation girls of 2000, Archivist Brian Murphy outlines the history of the Girls’ School.

On 11 June 1919 at a meeting of the Auckland Grammar School Board of Governors,

“That the Board having inspected various sites was of [the] opinion that the area of 16 acres on the Taylor estate at Alberton is the most suitable for the erection of a Boys’ school. Further, that application be made to the Education Department for the purchase of the site.” (Minutes; AGSB, Auck. City Library).

The Board was clear that it was to be a boys’ school. Yet two years later the Minister of Education wasn’t so sure. At the laying of the foundation stone on 4 April 1921 the Hon CJ Parr said “‘ I could hope that every boy and girl could attend this school for three or four years.” (Chronicle, Vol 1X No 1 Second Term 1921 pp8,9, AGS).

In 1980 a parents’ group organised a “questionnaire to gauge parent opinion on making Mount Albert Grammar School co-educational will be distributed to all standard one to form two pupils in Mount Albert ‘ spokesman for the parent group Mr Neil Purdon says it would not be financially viable or practical to build a co-educational secondary school in Mt Albert ‘ when the school’s board of governors was approached they were ’emphatically opposed” “. (Central Leader, June 1980)

A few weeks later the results of the survey were known and half the questionnaires were returned; 59% favoured co-education (55% of parents of boys and 63% of parents of girls). Both sides claimed a victory. Mr Purdon was reported as saying, “Surveys carried out throughout the world have revealed that parents generally prefer co-education on social and emotional grounds ‘”. (Central Leader, 15 July 1980) Headmaster Maurice Hall’s view was that he was pleased that so many parents (27%) favour single-sex schools.” (loc.cit.) Mr Hall went on to make what turned out to be a prescient observation; that he could not see Mount Albert Grammar School becoming co-educational for at least 20 years.

Mr Purdon wasn’t giving up. On 9 December 1980 he announced “we’re gong to force people to sit up and take notice of our group ‘ the battle has only just began ‘ next year we are going to be far more active.”
(Central Leader, 9 December, 1980)

They weren’t. It was an idea whose time had not come. The ‘concerned parents’ lost out

in the face of the heavyweights. The Education Department would not take a position until the views of the Minister were known, The Minister, Merv Wellington, was obviously not gong to put up the money, the Board of Governors was against it and the Headmaster certainly was.

investigated schools needs (at all levels) and as part of its report it considered co-education for this School. It was more a pragmatic response to overcrowding than a philosophical statement. “Girls on MAGS roll to solve crowding” claimed the Central Leader in a front-page banner on 11 February 1994.

The idea went off the boil for a while. Warwick Gibbs (the staff representative on the Board of Trustees) reported to a staff meeting on 14 July 1996. He said that he believed that we were the only single-sex secondary school in the area to even indicate a preparedness to review the matter. He mentioned that a public meeting that took place about two years earlier had only about 30 local parents who seemed ‘quite keen’, about 10 Old Boys who ‘observed a stony silence’ and about 10 teachers who ‘simply observed’. He went on to say that a committee was formed and ‘undertook a very small-scale survey. From that point nothing much happened.’

In an article on surveys the Central Leader (19 February 1997), in another front-page story, reported interviews with Old Boys Les Mills, Bryan Williams and the late Phil Warren all of whom had no real objection to the School accepting girls.

The New Zealand Herald on 21 February 1997, p. A7 began with, “Girls could be donning Mt Albert Grammar School uniforms in a year or two if parents agree to the boys’ school becoming co-educational and went to quote Deputy Headmaster, Brian O’Connell as saying ‘Results [of the survey] would be presented to the school board in March or April.” The Herald conducted its own informal poll in a class. “In a class of 14 fourth formers, 11 were for the change and three were against.”

“Girls at MAGS survey to be discussed” read a Central Leader headline (26 March 1997, p9) and it reported that the results would be discussed at the Board’s April meeting. There were other newspaper reports over the following weeks and months.

Returning to the second staff survey conducted by staff representative Warwick Gibbs, the results showed a divided staff with a clear majority not in favour of co-education and the representative was to vote against the proposal. a decision. The news of that decision was reported by The Herald (25 October 1997, p A7) and by the Central Leader (29 October 1997, front page). The Board had voted in favour of a separate Girls’ School with shared facilities. An inspired arrangement, which pleased the pro-lobby and appeased the nay-sayers.

Over the next two years there were comments on the proposed Girls’ School in Newsletters and in Corridors.

In anticipation of Ministerial approval the Central Leader reported in another front-page story (21 May 1999) that the School would advertise that week for conditional enrolments. That advertisement appeared in The Herald (25 May 1999, pD3) and again in the Central Leader the next day (p35).
In the Prospectus produced in 1999 for 2000 there were two pages of information on this new School and an application form for conditional enrolment.

After years of to-ing and fro-ing the official decision was made. In a ceremony on the front steps of the School on 29 July 1999 the Minister of Education, Dr Nick Smith handed a letter to Board Chairman Peter Thorp and Headmaster Greg Taylor giving his approval for the enrolment of girls.

No more time was wasted. Plans were well advanced. Tracey Cocker was appointed inaugural Director of Girls and Simone Connell, Dean of Girls and on Wednesday 24 November 1999 at 9am Year 8 girls from a range of schools began entrance tests in the Gamble Hall.

The notice to staff concerned in the tests picked up on something that had been in the Prospectus ‘ girls’ notices were in gold and at the same time notices for boys were printed on blue paper. A minor new tradition had been established.

Girls who had not sat the entrance test in November came on 1 February 2000 and the next day 138 girls began the most significant chapter in this Schools’ history since 291 boys walked through the door on 13 February 1922. old when Hayley Holm, the first girl on the register, arrived.

The girls were in five form classes and soon established themselves as a force within the School.

On the sporting front teams were entered in interschool competitions in basketball, cricket, hockey, soccer, tennis, touch, volleyball, waterpolo and five netball teams (with newly designed uniforms) as well as taking part in our own athletics, swimming and cross-country events and representing us in zone events in these sports.

Girls entered the Australian Schools’ English, Mathematics, Science and Chemistry competition and Goethe Society Examinations and had success greater than their numbers would suggest (The Australian Schools competitions are huge, involving hundreds of schools in a dozen countries). In our Junior Speech Competition girls took the first two places. There were cultural performances aplenty throughout the year.

On 22 June 2000 Prime Minister Helen Clark visited the School and presented a foundation badge to each girl. In that foundation year, donated trophies were awarded at Prizegiving for champions or best player in 10 sports. 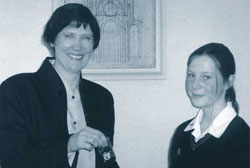 won over. Of the original 136, some left during the year for other localities and some arrived during the year. By year’s end 151 girls had been registered.

In the second year, 2001, the pioneers moved up a notch and there were 148 of them joined by 139 new Form 3 girls together with two senior girls from other schools. (Numbers taken from class lists in The Albertian).

They were not the only new faces. Tracey Cocker left at the end of 2000 and Simone Connell gave up the position of Dean. Elise Goddard was acting Director of Girls until the arrival of Yevette Williams and Kim Hunnerscheidt was Dean of Form 3 girls and Rosi Fitzpatrick, Dean of Form 4.

2001 was the year that performance took off. With girls well established in the School it

was possible to have the first annual Shakespearean play of the modern era, the New Zealand premiere of the musical The Outsiders and entries in a number of competitions such as the enormous Stage Challenge,
the Sheilah Winn Shakespeare in Schools competition and a raft of ethnic and music groups.
The number of sports teams was up too, including the first intermediate inter-school teams in cross-country, netball and tennis.

At prize giving there were new Intermediate trophies for these sports and for athletics and swimming. In addition there were two new major awards. The Albertians, in their last year as the Mount Albert Grammar School Old Boys’ Association presented an award to The Best All-Round Junior Girl. The first recipient was Katie Bowskill. The other award was gifted by Albertian Professor PCB Phillips as a memorial to his late mother and it was for the Top Third Form Girl and awarded first to Mary-Grace Aballe.

Our top girls sat some School Certificate subjects in the last year of that examination.

Form 3, 150 who, along with seven senior girls who were new to the school gave a class-list total of 434.

This was another big year for performance groups.

Aerobics was introduced as a sport, three teams were entered in a number of competitions and our top junior team won an open Auckland regional championship.

Traditional sports with more than one girls’ team were soccer with two and netball with six. In both sports a team was entered in a senior competition ‘ another first. There were trophies for the Best Senior Netball Player (Erica Tumutoa) and two for Senior Soccer; Best Player in Girls’ Soccer First XI and one for Captain of the same team; both awarded to Casey Boxall.

In various academic competitions girls performed with distinction and (along with boys) faced the first NCEA Level 1 assessments.

The School’s first girl prefects were appointed in 2003. The first official appearance of Alexandra Aimer Seton, Danica Atkins, Katie Bowskill, Sosefina Fa’amausili and Bridget Taylor was at a welcome to new staff and pupils on 29 January 2003.

There were 28 girls sports’ teams and 658 girls were on class lists. Once again girls were involved in the full range of sporting, academic, cultural and community pursuits. The first XI girls’ soccer team finished fourth in New Zealand and won an automatic entry into the 2004 National Tournament.

There were some staff changes. Yevette Williams took on the new role of Director of

Studies and Natasha Charman was acting Director of Girls until the arrival of TeAroha Keenan and then she was Dean of Year 9 Girls (this was the first formal year of the new class nomenclature). Other Deans were Elizabeth Grigel, Year 10; Naomi Wilson, Year 11 and Joanne Williams, Year 12.

2004 began a year of completion. The girls who started as children in 2000 were entering their final year of school as young women. The last group of boys who had experienced a boys-only Mount Albert Grammar School were gone.

Alexandra Aimer Seton and Danica Atkins from 2003 were back and new prefects for 2004 were Hayley Holm, Nusrat Kabir, Viviena Schaaf, Anna Tait and Amber Williams-Spiers. Thursday 29 July 2004 was the fifth anniversary of the official establishment of Mount Albert Grammar School for Girls. Many of the survivors of the first day of 2000 had a photograph taken on the front steps on that day, exactly five years after Nick Smith handed over the letter that began it all.

On December 3 the School held its 83rd annual Prize Giving. The first Dux of the Girls’ School was Alexandra Aimer Seton. The title of Victor Ludorum for best all-round sportswoman was awarded to Casey Boxall.