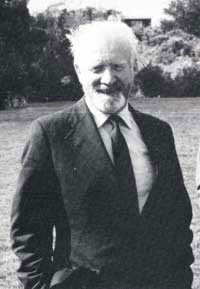 He arrived in 1978 as the newly appointed Deputy Headmaster and was last seen at school on Saturday 17 May, 2008, one week before his untimely death at the age of 71. As usual, he was there to watch the First XV with Headmasters Greg Taylor and Dale Burden.

The following extracts are from a valedictory given by Warwick Gibbs upon Eddie Wilson’s retirement on 10 May 2002.

There are many things I can’t speak about because I’m not qualified to. Those at Brett Kingstone’s farewell last year could not fail to be aware of the warmth and affection in which Eddie is held by our rugby fraternity. Only they know fully that aspect of his life. The circumstances of his appointment – they would be known to Mr Hall, not me. His work as Bursar, best known to the BOT.

So I can paint only some of the picture. And for the 90% of you who have been here just a few years, you may get a glimpse of part of the School’s past…

Eddie is nothing if not energetic and he applied his keen mind to the timetable as soon as he arrived. He freed up the third form structures and embraced the new, even the radical, with enthusiasm. He was always prepared to give things a trial. From the 5-period day we went to the 7-period day, then to the 7-period day with 8 periods on Wednesday. Sometimes his innovation in other areas would catch us unawares.

The best example I can think of was at the height of the skate-boarding craze (the first one). After initially banning them, but getting fed up with impounding them, he one day did something quite breathtaking. He announced that the boys could all bring skateboards provided they followed some responsible rules. Skateboard ramps sprang up and boys would spend intervals leaping from the quadrangle over the steps down to the Library. Unfortunately, the trial ended after damage to ramps and steps and pupils became a problem.

I mention innovation because it was said, after he had not gained the Headmaster’s position in 1988, that he lacked the “Vision Thing”. I’m never quite sure what that is. I suspect it has something to do with fantasizing about the future. I think Eddie’s problem was that he wouldn’t overblow his achievements. He didn’t have the Vision Thing, he had the Honesty Thing.

If pupils look back at the Wilson years, they will remember him best for his speeches. When it was time for him to speak, he would pause, and quietly introduce his theme. Then he would develop it steadily until, with a crescendo, it came to a mighty symphonic climax. Then a final pause, and the staff would leave, their steps echoing through the Hall in an otherwise eery and awestruck silence. Spell-binding stuff. All this with no notes. What were the topics of these speeches? Well, there was: Litter, dishonesty, litter, uniform, what the community thinks of you, litter …

But the one that sticks in my mind involved a prop. Not Olo Brown, a theatre prop. In the early 80s one-day cricket became a nation-wide craze and no less so at the School. The fields were covered with boys playing cricket. The trouble was, what to use for Mr Hall, Mr Wilson (in his first year) and Mr Hemus with the prefects of 1978

stumps? Boys soon discovered that the rubbish bins were ideal. The result was battered-bin syndrome.

Eddie began his oration in the usual way, decrying the damage to the bins, then, for his climax, pulled out one such bin he had carefully hidden tehind the rostrum and hurled it to the floor of the stage where it then rolled to the edge and crashed further to the ground by the feet of goggle-eyed third-formers…

Spell-binding. Eddie was a language teacher – French, German, Indonesian. He knows how to use words even if he pronounces them differently from a lot of us. “This yir” was imitated by large numbers of boys, although never to his face…

The office of Deputy Headmaster always had respect. Eddie saw himself as firm but fair, with particular emphasis on firm. A left-handed firmness. These were the yirs of corporal punishment, the administering of which was often left to Eddie…

His interrogation skills were legendary. He could break down the most recalcitrant louts. His technique was not so much swinging from good cop to bad cop, but rather from bad cop to worse cop…

Eddie was initially involved in soccer, but his real love turned out to be rugby…

In the staff-prefects-Form 7 rugby match, Eddie was at first 5/8. These can be grudge matches with teachers targeted. But Eddie’s fleetness of foot and adroit passing and kicking (as well as coming off at half-time) kept him out of the firing line of those whose backsides remembered him…

He was a canny player in rugby, and, I also found out, at golf. He didn’t take risks. He used a two-iron while the woods stayed in the bag, and nagged away at you with his Coach Wilson with the First XI Football team in 1979 , before the rugby days……

consistency. Utterly canny. He was a natural to be the Bursar.

Finally, and most importantly, character.

I’ve never quite worked out what will make Eddie laugh. I know that jokes about Yorkshire won’t. He’s a regular Calvin Coolidge on that topic. And bookkeeping isn’t a laugh-a-minute either. But he appreciates a good joke when he hears it and he can tell them too.

There has always been a certain gravitas about him, a seriousness, as much a function of his office in the school as of his character.

But I always felt, whenever we worked together, that his focus was always the boys in the school, their progress and their welfare. When devising option structures, he and I would spend hours and hours tinkering and checking to see that the maximum number of boys could get their chosen course – all this in the precomputer days when every pupil’s name was written into every class by hand. He certainly wasn’t fussed about making his CV look good – his was the triumph of reality over appearance, of always 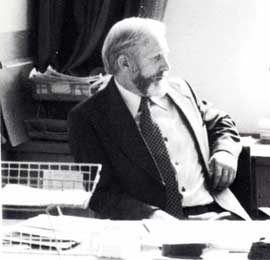 being what you see. I can only look back at those days with nostalgia:

No spin-doctoring…When the last swimming-sports at the Olympic Pool, plagued by problems with trains and buses which transported the entire school to Newmarket, wound up prematurely at 2.15 in the afternoon amidst a fearsome thunderstorm, with kids taking off in all directions, Eddie turned to me in the carpark and said: “Warwick, if we have to go out, we might as well go out on a complete shambles” and with a wry

smile he got into his car and left the scene.

In recent years, Eddie’s oratorical skills have been in abeyance, unless you count haranguing the staff about order numbers and cheques. But a few years ago another generation had the privilege of hearing Eddie speak, this time at the ANZAC service. He hadn’t lost his touch. Anyone can talk about the history of Gallipoli and we’ve all heard it a hundred times. Eddie took the personal approach: he spoke straight to the hearts of the boys, not about Gallipoli, but about the boys themselves and about himself. He established a link between our many new immigrants and himself by saying how he too had been a new immigrant, mystified by the fuss New Zealanders made about
April 25th. And he spoke of how, after many years, he understood more and more about what it is to be a New Zealander.
And this is the Eddie too often hidden from us. With a warm understanding of human nature,

whether academic or unacademic. I hesitate to say his feminine side. It is the man who will motion me over to his car and say, “Get in and listen to this” and his eyes will light up as we listen to the Jacques Loussier trio playing Bach.