On Wednesday, 24th September, the team left by mail train, after a hearty send-off by the A.R.U. officials, old boys and friends. The journey to Marton over, with little sleep, and breakfast over, the team indulged in a short practice at Marton Park. Arriving at New Plymouth at 7.20 p.m., we were met by the Taranaki R.U. officials and members of the school team and staff…

On Saturday the threatening weather broke early and conditions were bad for any game. Although the rain continued throughout the match, the ground stood up to the test well, and both teams gave remarkable exhibitions of handling. On the day, New Plymouth were too good, and won through superiority in almost every department…

After the match, although Mt. Albert carried a load of sorrow, they were helped to forget it by the royalty of their entertainment. The evening was spent at the boxing contests. On Sunday all the boys attended church parade, and in the afternoon were taken for a motor drive to Rahuta… On Monday morning the team left for Auckland, visiting en route, Wanganui, where an enjoyable morning was spent. Early on Tuesday morning a tired set of boys were met by Mr. Frost, chairman of the A.R.U., and welcomed back home.

We regret to record that C.L. Ash, a member of the School First Fifteen, 1924, has had to have his left leg amputated, as the result of an injury sustained in the Moascar Cup match against New Plymouth High School. For some time he felt no serious effects, and was able to take part in the Athletic Sports later in the season; but early this year he began to have trouble, which led ultimately to the loss of his limb.
The Albertian 1925

C.L. Ash also entered the School in 1922, and at once began to take an active part in its various activities. He proved himself to be an athlete of a very fine type, and while still a young boy was a member of the Football XV. After leaving School in 1924 an old injury to the knee recurred and led to serious trouble. The School was shocked to learn 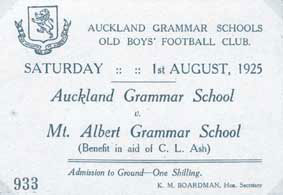 that only amputation of the leg could prevent fatal results. Unfortunately, the malady could not be arrested, and during the summer vacation of 1925 the School was again saddened by the news of the death of another of its Old Boys. While there seemed hope of Ash’s life being saved by an operation, the practical sympathy of the School was shown by arranging a benefit football match with the Auckland Grammar School. In the severer grief of losing a son, Mr. & Mrs. Ash gratefully recalled what the School had done, and can still know that their son is well remembered.
The Albertian 1926

Flyers produced by the Old Boys’ Association frequently included invitations to School sports events, either as spectators or as participants. 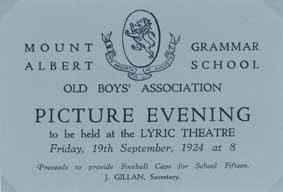 School Sports
This year the School Sports will be held on the afternoons of the 4th and 5th NOVEMBER. At the conclusion of the second day, an Old Boys’ 100 yards Championship and 50 yards Mufti Race will be held. Will those who are desirous of entering for the 100 years please forward their names to either Mr. H.L. Towers, or the Secretary.
Flyer, 1925 (with Blooper)

Are to be held in the Domain on the afternoons of Thursday and Friday, the 29th and 30th of March. Towards the end of the second afternoon, post entries will be received for the 50 yds. Mufti and 100 yds. Championship races for Old Boys. All Old Boys are cordially invited to attend.

Under the heading School Institutions the Calendar included some information about sport. In the 2nd and 3rd term of 1957 the heading was changed to School Activities. Following is the Sports section for that half year.

Regular practices are held after school, and teams are entered in the Secondary School Competitions for the following summer and winter games.

Throughout a greater part of the School’s history elaborate sports’ certificates were printed on heavyweight card. Earlier, they were printed for individual sports, in later years general ones were used.

We are fortunate to have Albertians who have gifted sporting news and memorabilia. In 2002 Kim Ryder gave the School his 1938 miniature hockey cup and a report of the team. Following is an extract.
‘We won the Championship and Knockout and were successful in all our 22 games. As a result of our achievement the Albertians Hockey Club donated a Miniature Cup to each member of the team.
The Albertians were Old Boys who formed a Hockey Club and played in the Senior Grade of the Auckland Hockey Association.’

1938 was a famous year in the School’s sporting history. Not only did we win the hockey championship but also the championship in rugby and soccer, athletics and cricket and as the New Zealand Herald (date unknown) reported “the light-blues were victorious in the head of the harbour eight oar race”. The Herald article was a gift from Graham Burgess. In his 1938 Headmaster’s Report FW Gamble said; “I am not fond of reciting lists of successes ‘ Yet we can properly view with satisfaction that in team-work the School has figured with unusual prominence this year.”

Butch Brown reporting in Golden Jubilee p124 wrote;
“Recognising the outstanding success of the School in every branch of sport the Old Boys presented the 1938 Commemorative Cup for interform competition.”

And from the Kingstone family came an article about their father, Colin from an 8 0’clock of October 1938.
One of the most spectacular collegiate athletes ever produced in Auckland, or for that, matter New Zealand, is C.A. Kingstone, who in 1938 was captain of both the Mount Albert Grammar School XI, and XV, and inter-secondary schools’ field champion. The text goes on to mention two new trophies donated by Colin Kingstone.

Alan Thom has gifted a significant number of items including a programme for the first boxing contest between the School and King’s College, it is headed

King’s College were in the red corner and the School in the blue corner (no surprises there).

The Albertian of that year record that
“‘ In welcoming Mr. H.B. Lusk, acting-headmaster of King’s College, and members of his team, Mr. Gamble said that the aim of the tournament was to improve the standard of boxing in schools ‘”

“‘ In reply to Mr. Gamble, Mr. Lusk thanked the School for its hospitality and stated that the inauguration of the tournament would no doubt add to the fine spirit of friendship already existing between the two schools ‘”

From Les Laurenson came a photograph of the 1947 First Fifteen before the final match of the year together with a New Zealand Herald report on the match, which begins.

Mount Albert Grammar won the Auckland secondary schools’ senior Rugby championship when for the first time since before the war College Day was celebrated at Eden Park on Saturday. The team achieved its victory with a resounding defeat of Auckland Grammar School…
New Zealand Herald, 11 August 1947

From the Headmasters’ Report of 1957:
“PG Snell established a record in the Inter Secondary Schools’ Senior 880 yards breaking the two minute record which has stood for many years ‘” and
“Rowing had its 21st birthday this year and our School VIII celebrated it fittingly ‘ perhaps this was our best eight ever and their success made a happy occasion of the Reunion Dinner for ex-members of the School Eights.’

In the Old Boys’ supplement of 1960 The Albertian we read:

” All the world knows that Arthur [Lydiard] is coach of Peter Snell, Murray Halberg and Barry Magee, the only New Zealand medallists at the Rome Olympics ‘”

“Les Mills had the honour of being captain of the New Zealand Olympic Games to Rome.”

In the 1969 The Albertian it was reported that
“During the August holidays, the School entered a team in the first Inter Collegiate Squash Tournament.”

A few weeks later an Under 15 team was formed and won its championship.

Also in 1969:
“A Secondary School [Table Tennis] Team Competition got underway at the Gillies Avenue Stadium on Friday nights in the second term. The “A” team ‘ won the tournament without the loss of a match ‘”

The following year, 1970, the Headmaster, G M Hall in his first annual report had this to say about Association Football:
“The season proved to be one of the most successful the school has experienced. The First XI won the Auckland Championship. The Senior C championship was won and the Intermediate A won their competition without conceding one goal throughout the season. In addition the First XI won the New Zealand Secondary Schools tournament.”